Do you have a geology question you'd like answered?
Send it along and we'll see if we can find the answer.

Places to look for more information on dinosaurs and paleontology 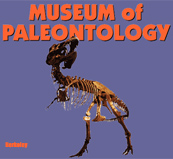 Answers provided by our MBMG staff